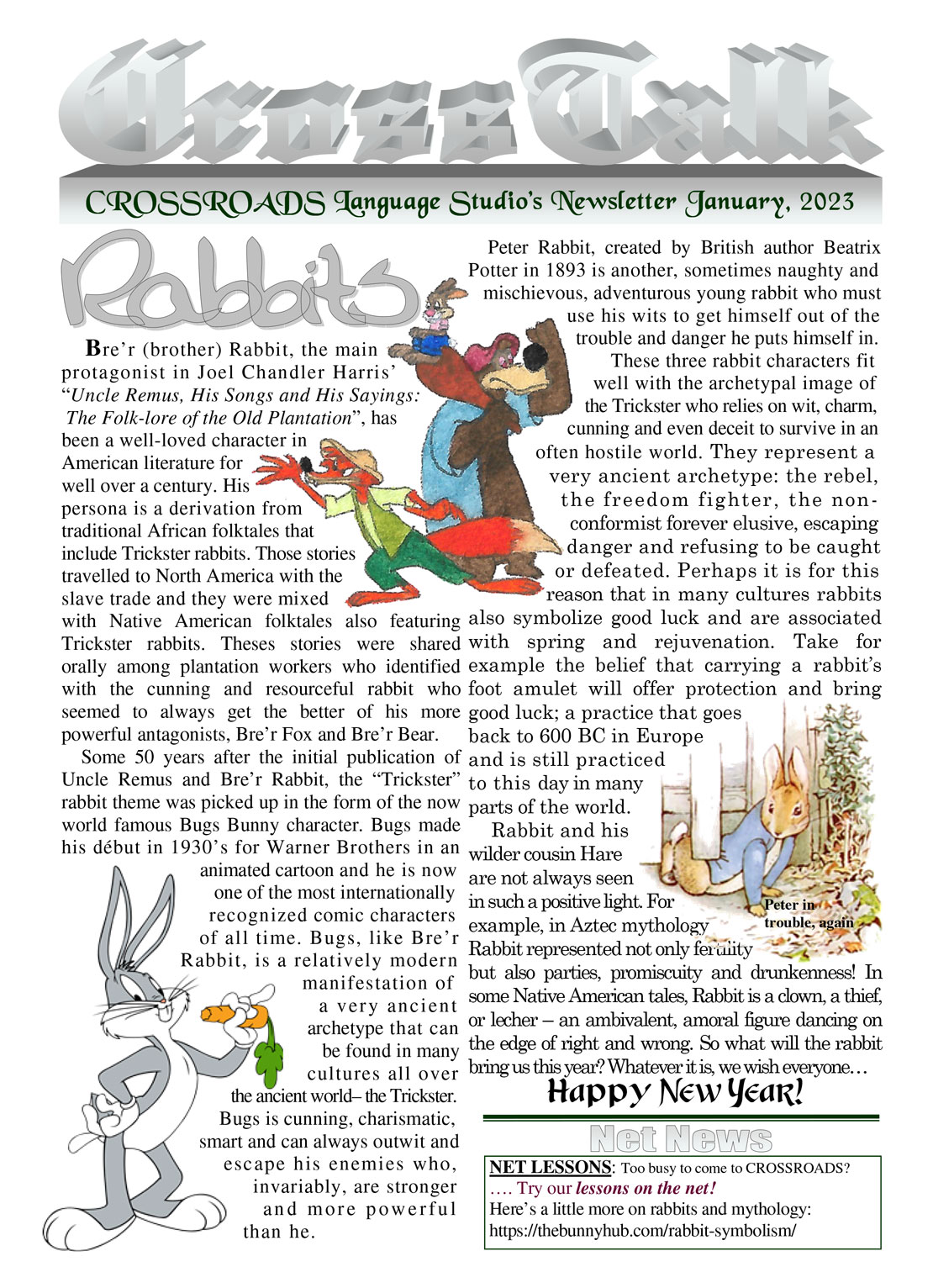 Bre’r (brother) Rabbit, the main
protagonist in Joel Chandler Harris’
“Uncle Remus, His Songs and His Sayings:
The Folk-lore of the Old Plantation”, has
been a well-loved character in
American literature for
well over a century. His
persona is a derivation from
traditional African folktales that
include Trickster rabbits. Those stories
travelled to North America with the
slave trade and they were mixed
with Native American folktales also featuring Trickster rabbits. Theses stories were shared orally among plantation workers who identified with the cunning and resourceful rabbit who seemed to always get the better of his more powerful antagonists, Bre’r Fox and Bre’r Bear.
Some 50 years after the initial publication of Uncle Remus and Bre’r Rabbit, the “Trickster” rabbit theme was picked up in the form of the now world famous Bugs Bunny character. Bugs made his début in 1930’s for Warner Brothers in an
animated cartoon and he is now
one of the most internationally
recognized comic characters
of all time. Bugs, like Bre’r
Rabbit, is a relatively modern
manifestation of
a very ancient
archetype that can
be found in many
cultures all over
the ancient world– the Trickster.
Bugs is cunning, charismatic,
smart and can always outwit and
escape his enemies who,
invariably, are stronger
and more powerful
than he.


Peter Rabbit, created by British author Beatrix Potter in 1893 is another, sometimes naughty and
mischievous, adventurous young rabbit who must
use his wits to get himself out of the
trouble and danger he puts himself in.
These three rabbit characters fit
well with the archetypal image of
the Trickster who relies on wit, charm,
cunning and even deceit to survive in an
often hostile world. They represent a
very ancient archetype: the rebel,
the freedom fighter, the non-
conformist forever elusive, escaping
danger and refusing to be caught
or defeated. Perhaps it is for this
reason that in many cultures rabbits also symbolize good luck and are associated with spring and rejuvenation. Take for example the belief that carrying a rabbit’s foot amulet will offer protection and bring good luck; a practice that goes
back to 600 BC in Europe
and is still practiced
to this day in many
parts of the world.
Rabbit and his
wilder cousin Hare
are not always seen
in such a positive light. For
example, in Aztec mythology
Rabbit represented not only fertility
but also parties, promiscuity and drunkenness! In some Native American tales, Rabbit is a clown, a thief, or lecher – an ambivalent, amoral figure dancing on the edge of right and wrong. So what will the rabbit bring us this year? Whatever it is, we wish everyone…
Happy New Year! 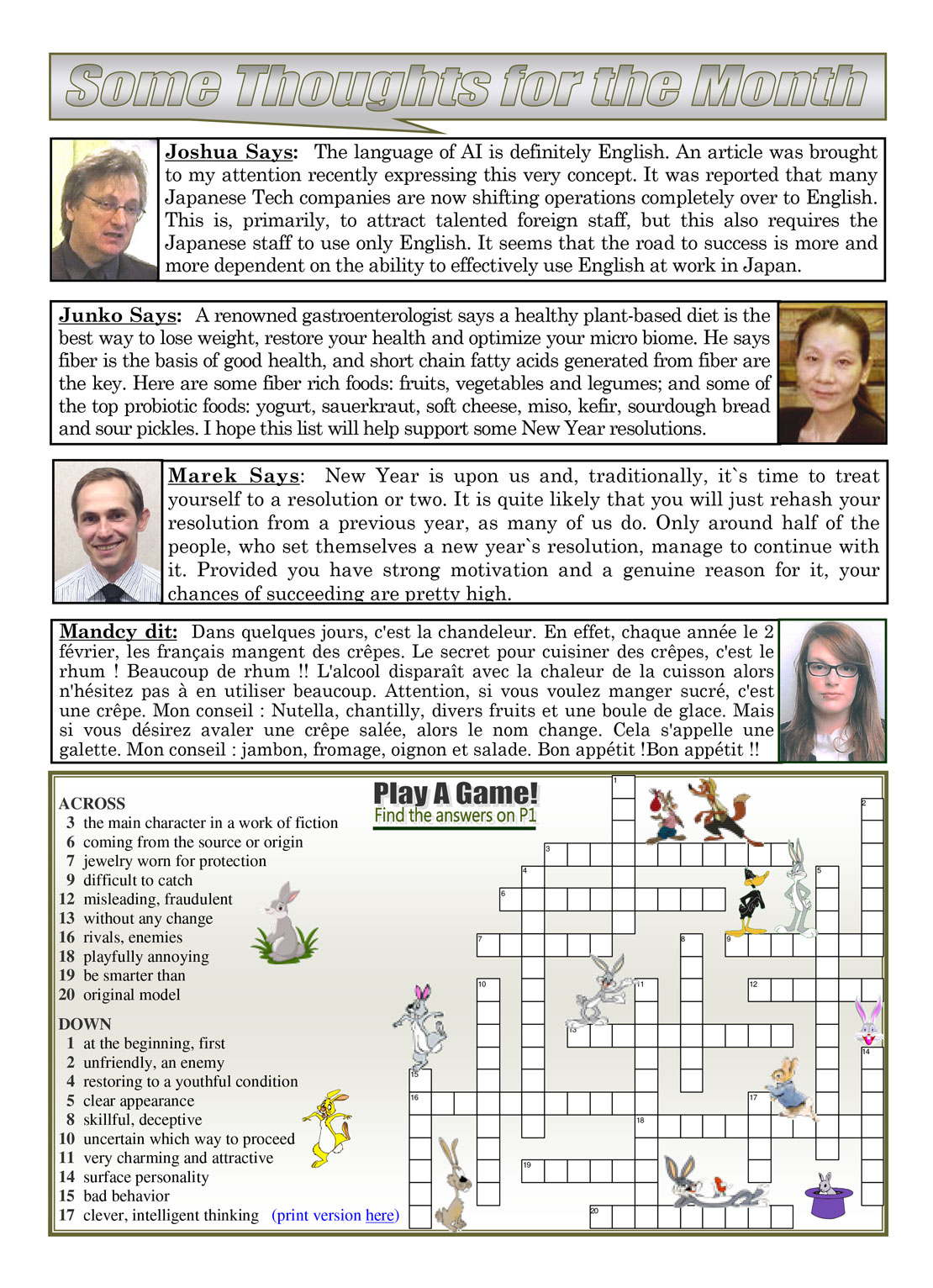 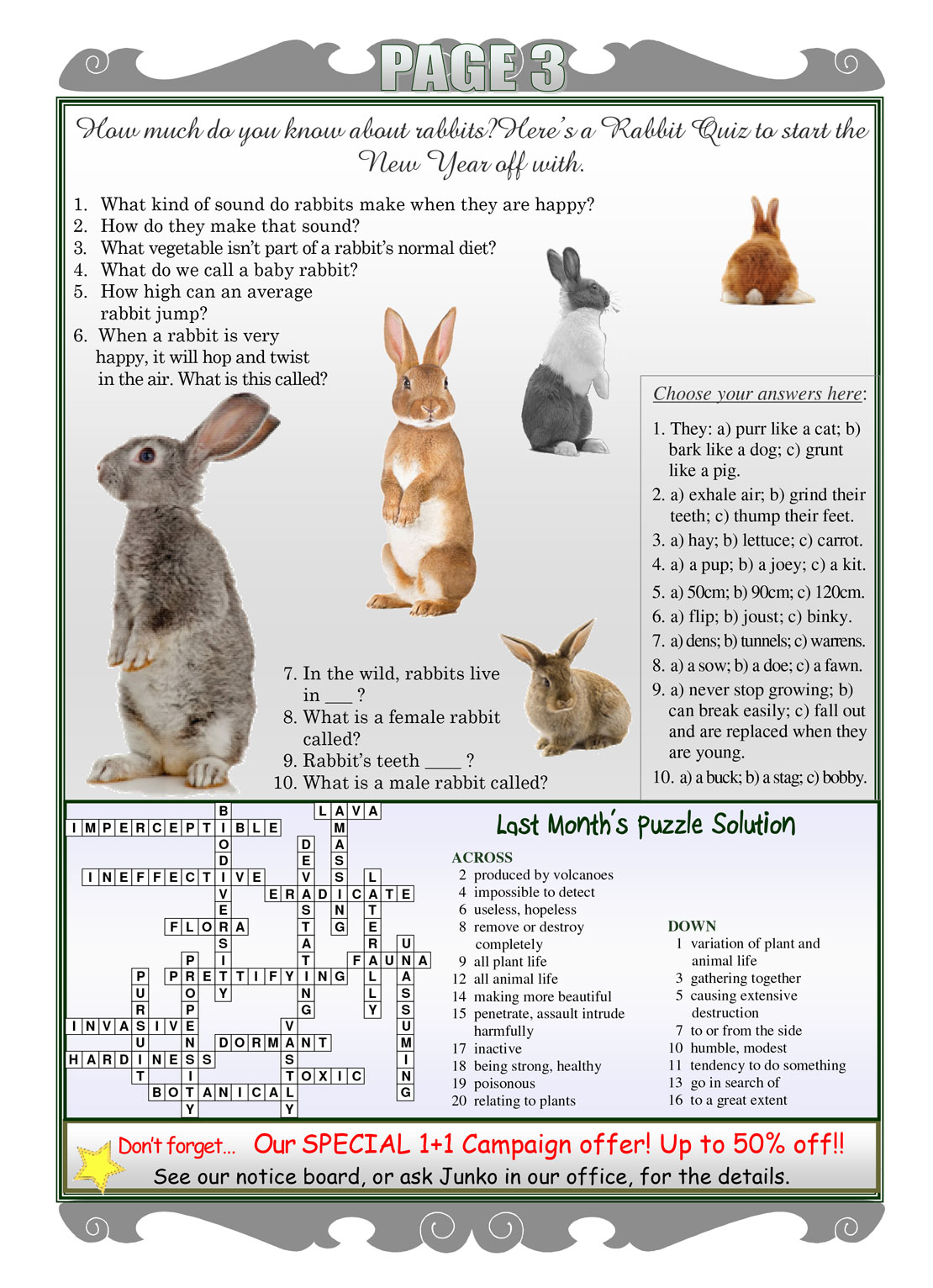