CROSSROADS Language Studio’s Newsletter September , 2020 HOW DID SHE SURVIVE? 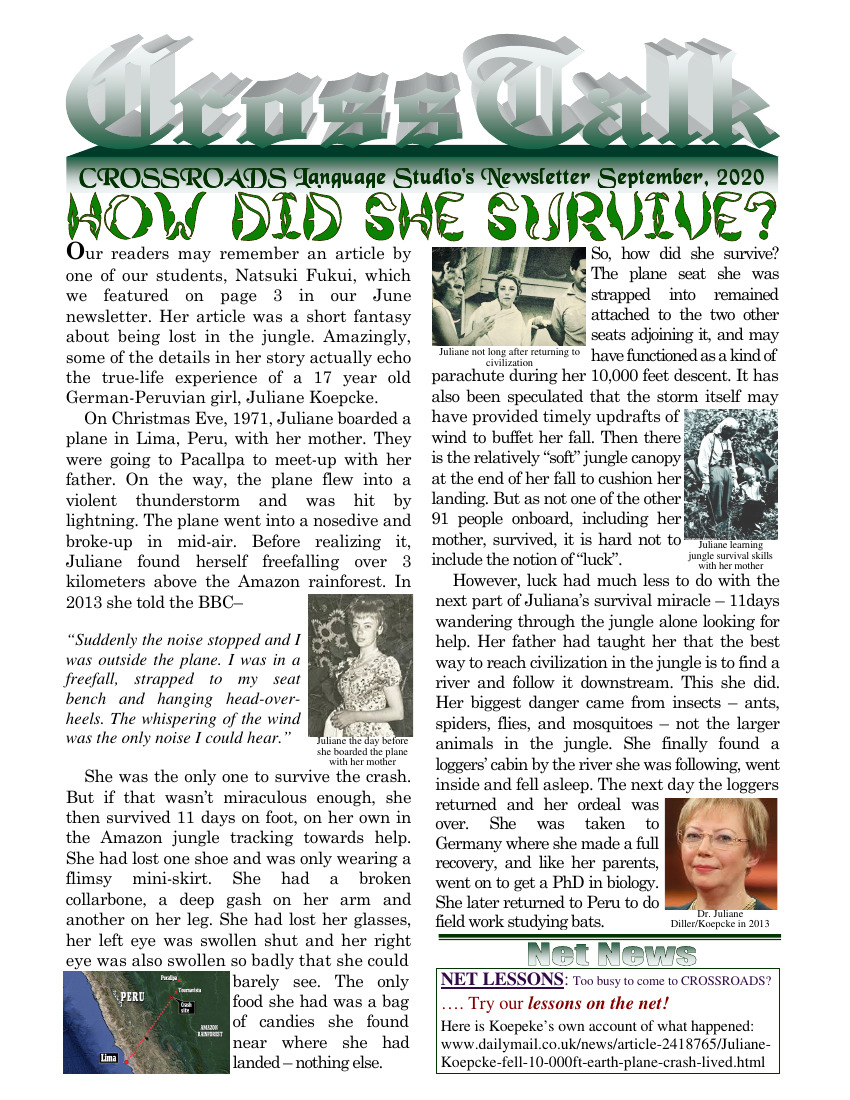 Our readers may remember an article by one of our students, Natsuki Fukui, which we featured on page 3 in our June newsletter. Her article was a short fantasy about being lost in the jungle. Amazingly, some of the details in her story actually echo the true-life experience of a 17 year old German-Peruvian girl, Juliane Koepcke.

On Christmas Eve, 1971, Juliane boarded a plane in Lima, Peru, with her mother. They were going to Pacallpa to meet-up with her father. On the way, the plane flew into a violent thunderstorm and was hit by lightning. The plane went into a nosedive and broke-up in mid-air. Before realizing it, Juliane found herself freefalling over 3 kilometers above the Amazon rainforest. In 2013 she told the BBC–

母親と一緒に飛行機に乗る前日のジュリアーヌ
“Suddenly the noise stopped and I was outside the plane. I was in a freefall, strapped to my seat bench and hanging head-over- heels. The whispering of the wind was the only noise I could hear.”

She Janis was the only one to survive the crash. But if that wasn’t miraculous enough, she then survived 11 days on foot, on her own in the Amazon jungle tracking towards help. She had lost one shoe and was only wearing a flimsy mini-skirt. She had a broken collarbone, a deep gash on her arm and another on her leg. She had lost her glasses, her left eye was swollen shut and her right eye was also swollen so badly that she could barely see.アマゾンのジャングルで助けを求めて徒歩で11日間 The only food she had was a bag of candies she found near where she had landed – nothing else.

革命から戻って間もなくのジュリアーナ Juliane not long after returning tocivilizationSo, how did she survive? The plane seat she was strapped into remained attached to the two other seats adjoining it, and may have functioned as a kind of parachute during her 10,000 feet descent.Juliane learning jungle survival skills with her motherIt has also been speculated that the storm itself may have provided timely updrafts of wind to buffet her fall. Then there is the relatively “soft” jungle canopy at the end of her fall to cushion her landing. But as not one of the other 91 people onboard, including her mother, survived, it is hard not to include the notion of “luck”.

However, luck had much less to do with the next part of Juliana’s survival miracle – 11days wandering through the jungle alone looking for help. Her father had taught her that the best way to reach civilization in the jungle is to find a river and follow it downstream. This she did. Her biggest danger came from insects – ants, spiders, flies, and mosquitoes – not the larger animals in the jungle. She finally found a loggers’ cabin by the river she was following, went inside and fell asleep. The next day the loggers returned and her ordeal was over.Dr. Juliane Diller/Koepcke in 2013 She was taken to Germany where she made a full recovery, and like her parents, went on to get a PhD in biology. She later returned to Peru to do field work studying bats. 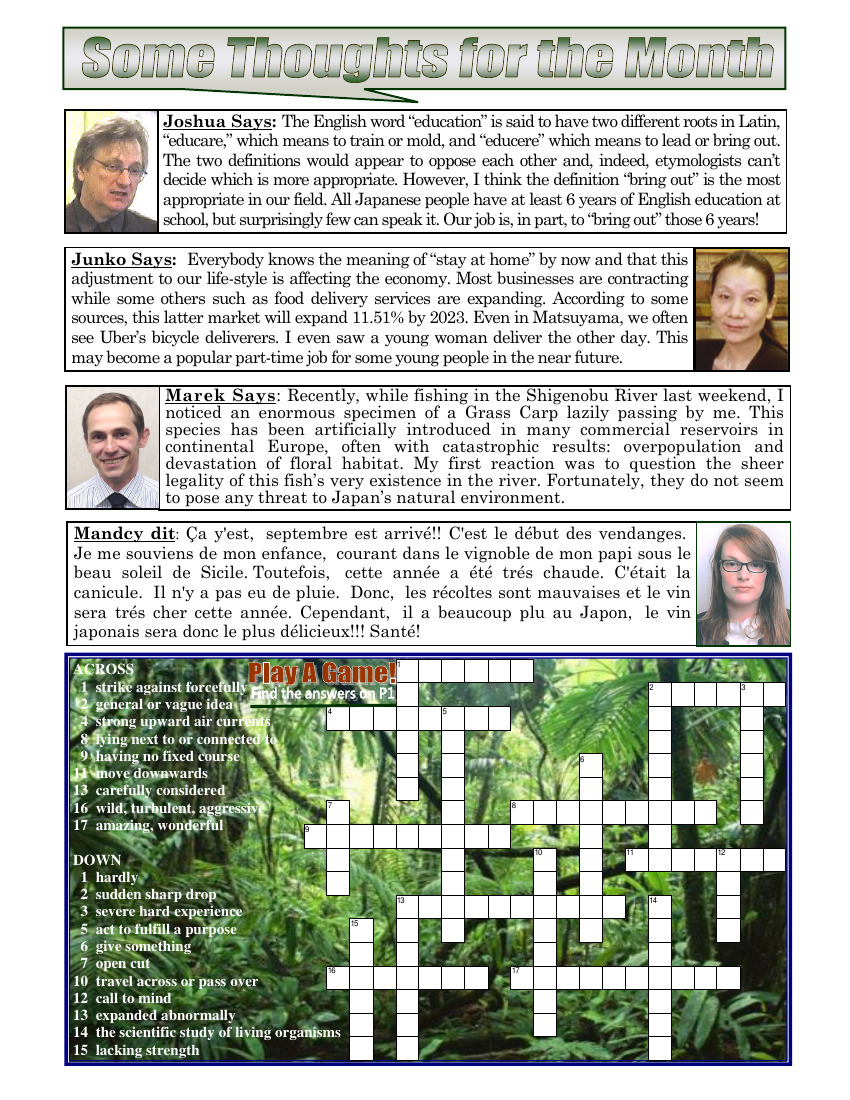 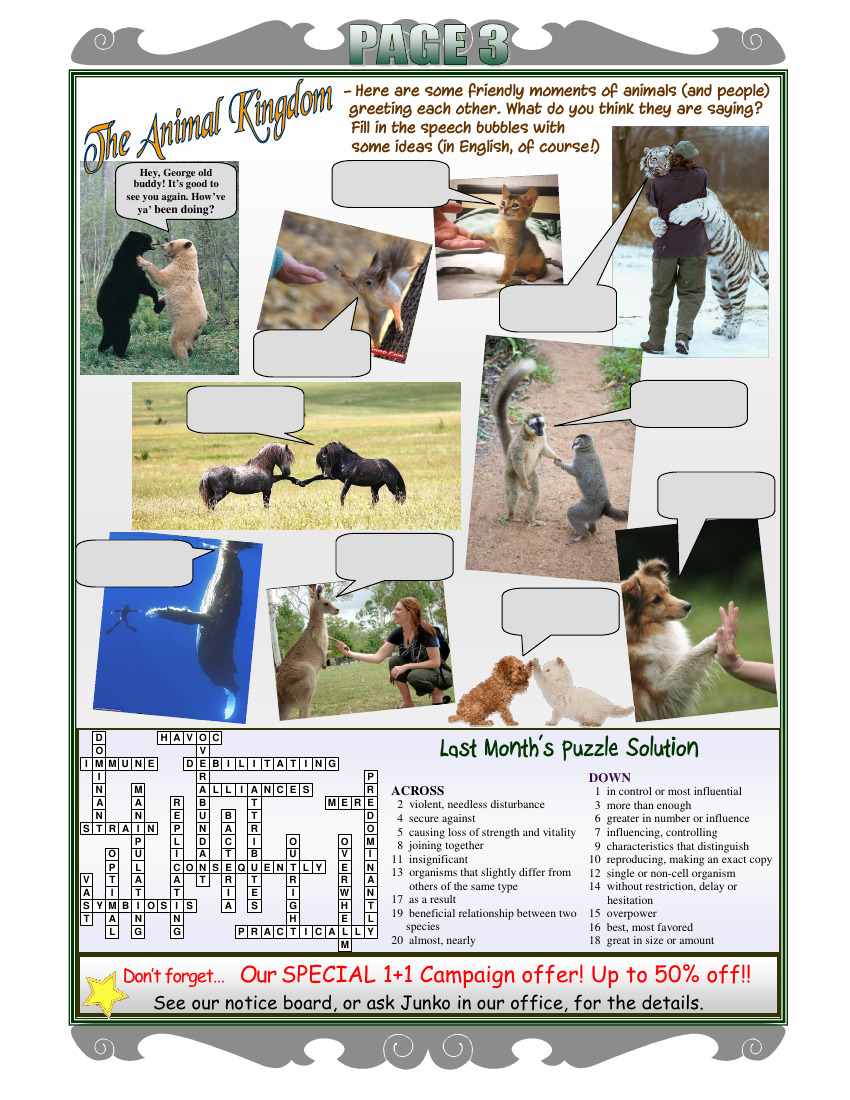