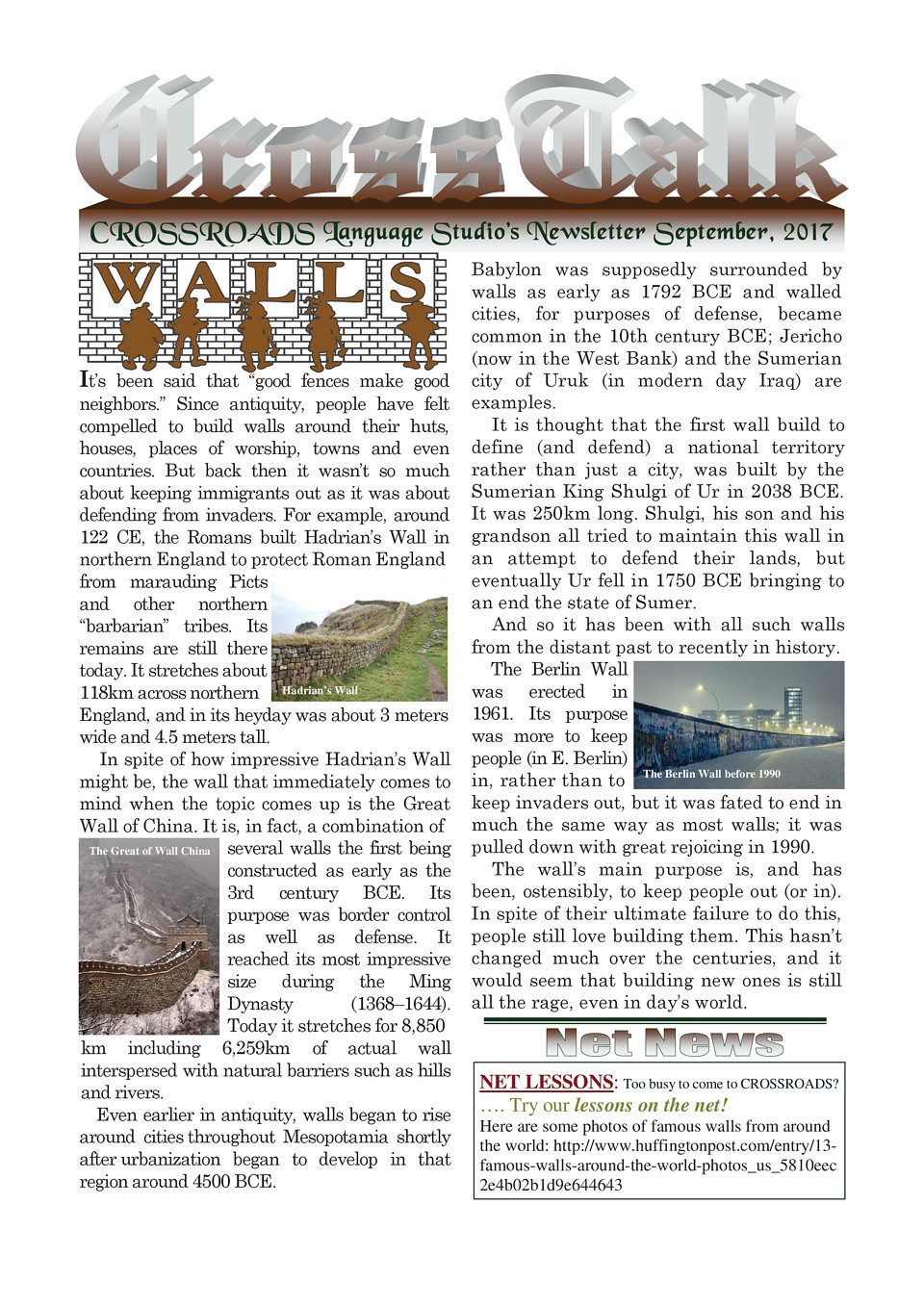 It’s been said that “good fences make good neighbors.” Since antiquity, people have felt compelled to build walls around their huts, houses, places of worship, towns and even countries. But back then it wasn’t so much about keeping immigrants out as it was about defending from invaders. For example, around 122 CE, the Romans built Hadrian’s Wall in northern England to protect Roman England

from marauding Picts and other northern “barbarian” tribes. Its remains are still there today. It stretches about
118km across northern
England, and in its heyday was about 3 meters wide and 4.5 meters tall.

In spite of how impressive Hadrian’s Wall might be, the wall that immediately comes to mind when the topic comes up is the Great Wall of China. It is, in fact,

The Great of Wall
a combination of
several walls the first being constructed as early as the 3rd century BCE. Its purpose was border control as well as defense. It reached its most impressive size during the Ming Dynasty (1368–1644). Today it stretches for 8,850
km including 6,259km of actual wall interspersed with natural barriers such as hills and rivers.
Even earlier in antiquity, walls began to rise around cities throughout Mesopotamia shortly after urbanization began to develop in that region around 4500 BCE.

Babylon was supposedly surrounded by walls as early as 1792 BCE and walled cities, for purposes of defense, became common in the 10th century BCE; Jericho (now in the West Bank) and the Sumerian city of Uruk (in modern day Iraq) are examples.

It is thought that the first wall build to define (and defend) a national territory rather than just a city, was built by the Sumerian King Shulgi of Ur in 2038 BCE. It was 250km long. Shulgi, his son and his grandson all tried to maintain this wall in an attempt to defend their lands, but eventually Ur fell in 1750 BCE bringing to an end the state of Sumer.

And so it has been with all such walls from the distant past to recently in history.

The Berlin Wall was erected in 1961. Its purpose was more to keep people (in E. Berlin) in, rather than to
keep invaders out, but it was fated to end in much the same way as most walls; it was pulled down with great rejoicing in 1990.
The wall’s main purpose is, and has been, ostensibly, to keep people out (or in). In spite of their ultimate failure to do this, people still love building them. This hasn’t changed much over the centuries, and it would seem that building new ones is still all the rage, even in day’s world. 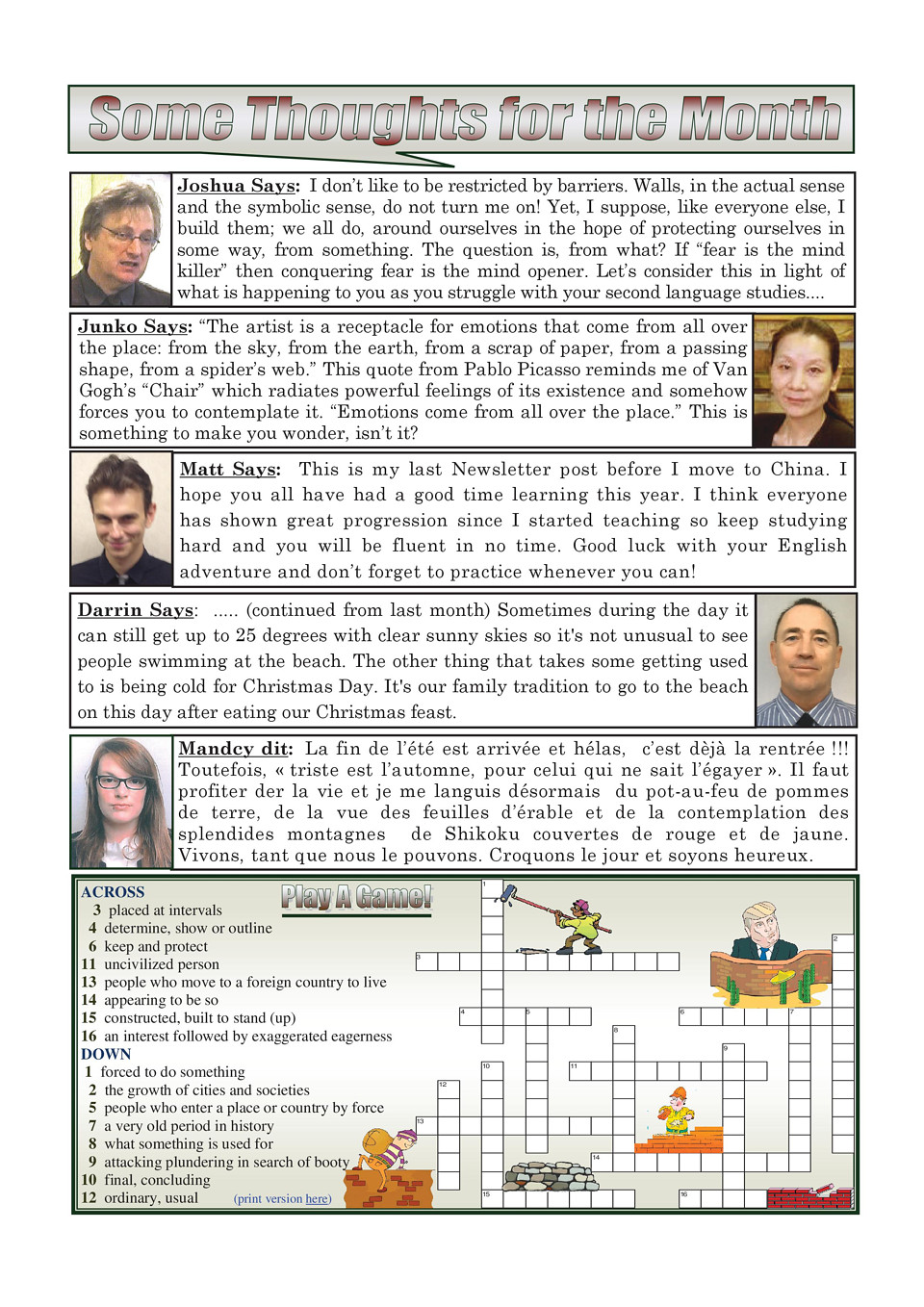 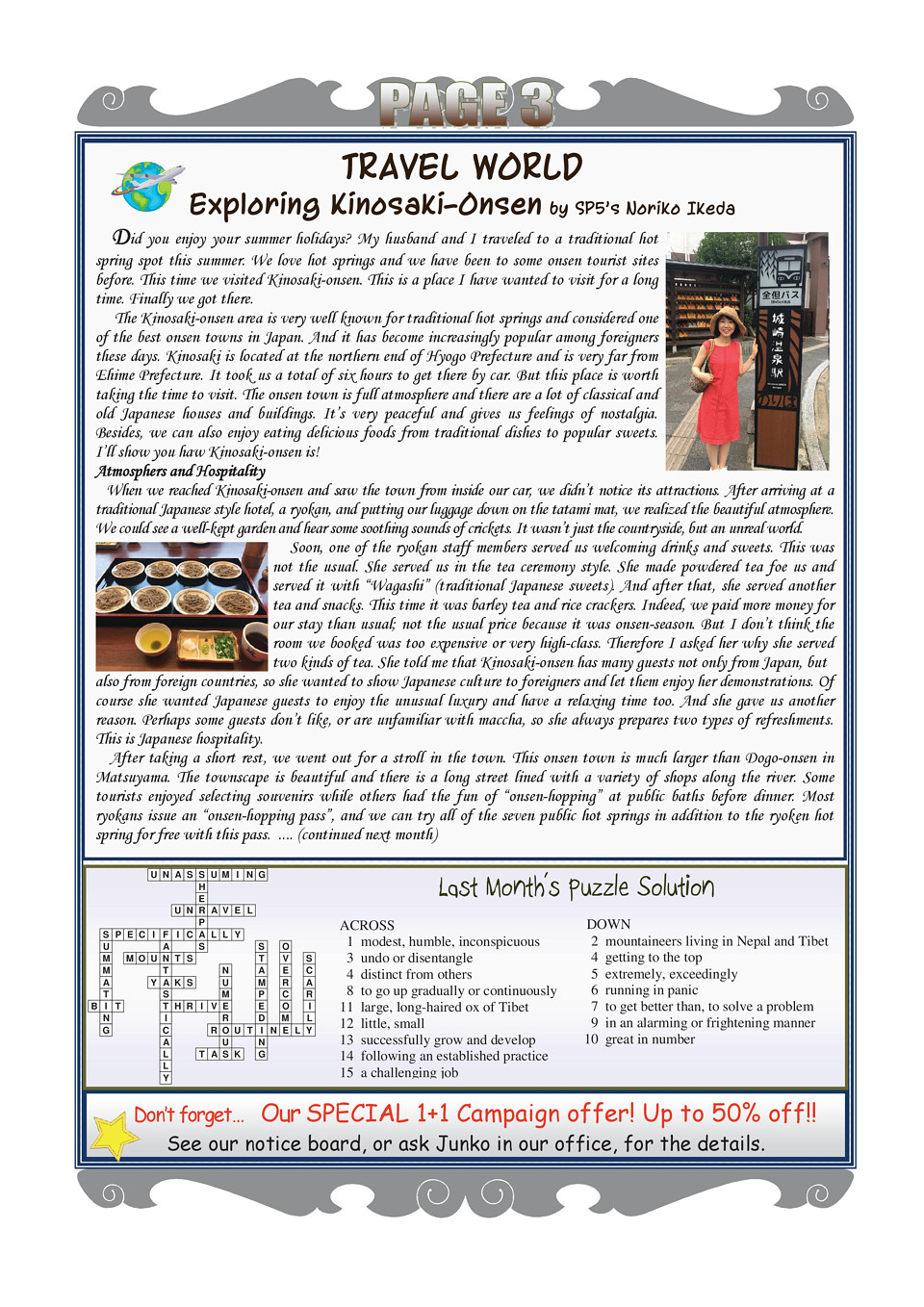