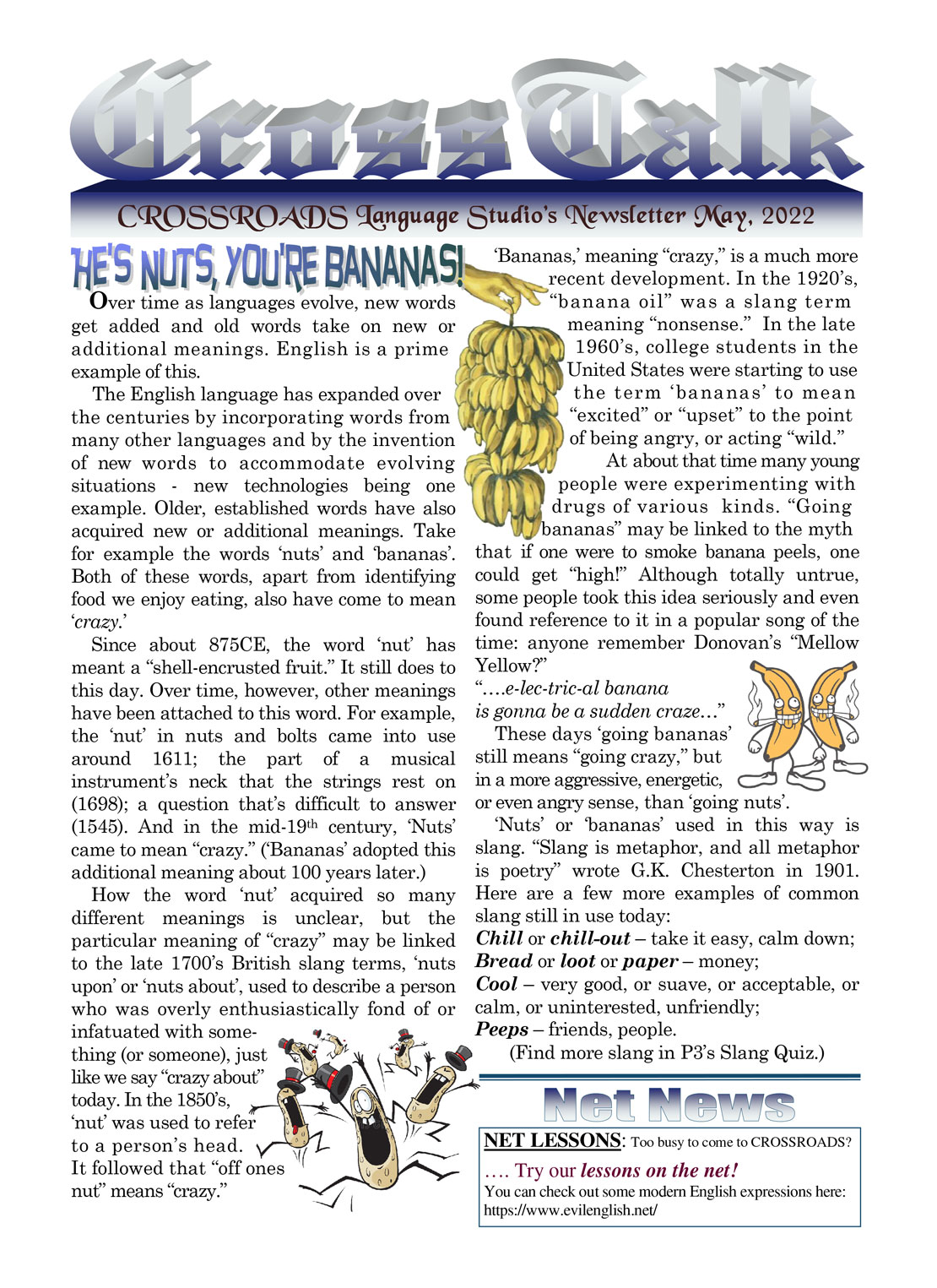 Over time as languages evolve, new words get added and old words take on new or additional meanings. English is a prime example of this.
The English language has expanded over the centuries by incorporating words from many other languages and by the invention of new words to accommodate evolving situations – new technologies being one example. Older, established words have also acquired new or additional meanings. Take for example the words ‘nuts’ and ‘bananas’. Both of these words, apart from identifying food we enjoy eating, also have come to mean ‘crazy.’
Since about 875CE, the word ‘nut’ has meant a “shell-encrusted fruit.” It still does to this day. Over time, however, other meanings have been attached to this word. For example, the ‘nut’ in nuts and bolts came into use around 1611; the part of a musical instrument’s neck that the strings rest on (1698); a question that’s difficult to answer (1545). And in the mid-19th century, ‘Nuts’ came to mean “crazy.” (‘Bananas’ adopted this additional meaning about 100 years later.)
How the word ‘nut’ acquired so many different meanings is unclear, but the particular meaning of “crazy” may be linked to the late 1700’s British slang terms, ‘nuts upon’ or ‘nuts about’, used to describe a person who was overly enthusiastically fond of or infatuated with something (or someone), just like we say “crazy about” today. In the 1850’s,‘nut’ was used to refer to a person’s head.
It followed that “off ones nut” means “crazy.”

Bananas,’ meaning “crazy,” is a much more recent development. In the 1920’s, “banana oil” was a slang term meaning “nonsense.” In the late 1960’s, college students in the United States were starting to use the term ‘bananas’ to mean “excited” or “upset” to the point of being angry, or acting “wild.”
At about that time many young people were experimenting with drugs of various kinds. “Going bananas” may be linked to the myth that if one were to smoke banana peels, one could get “high!” Although totally untrue, some people took this idea seriously and even found reference to it in a popular song of the time: anyone remember Donovan’s “Mellow Yellow?”
“….e-lec-tric-al banana is gonna be a sudden craze…”
These days ‘going bananas’ still means “going crazy,” but in a more aggressive, energetic, or even angry sense, than ‘going nuts’.
‘Nuts’ or ‘bananas’ used in this way is slang. “Slang is metaphor, and all metaphor is poetry” wrote G.K. Chesterton in 1901.
Here are a few more examples of common slang still in use today:
Chill or chill-out – take it easy, calm down;
Bread or loot or paper – money;
Cool – very good, or suave, or acceptable, or calm, or uninterested, unfriendly;
Peeps – friends, people.
(Find more slang in P3’s Slang Quiz.) 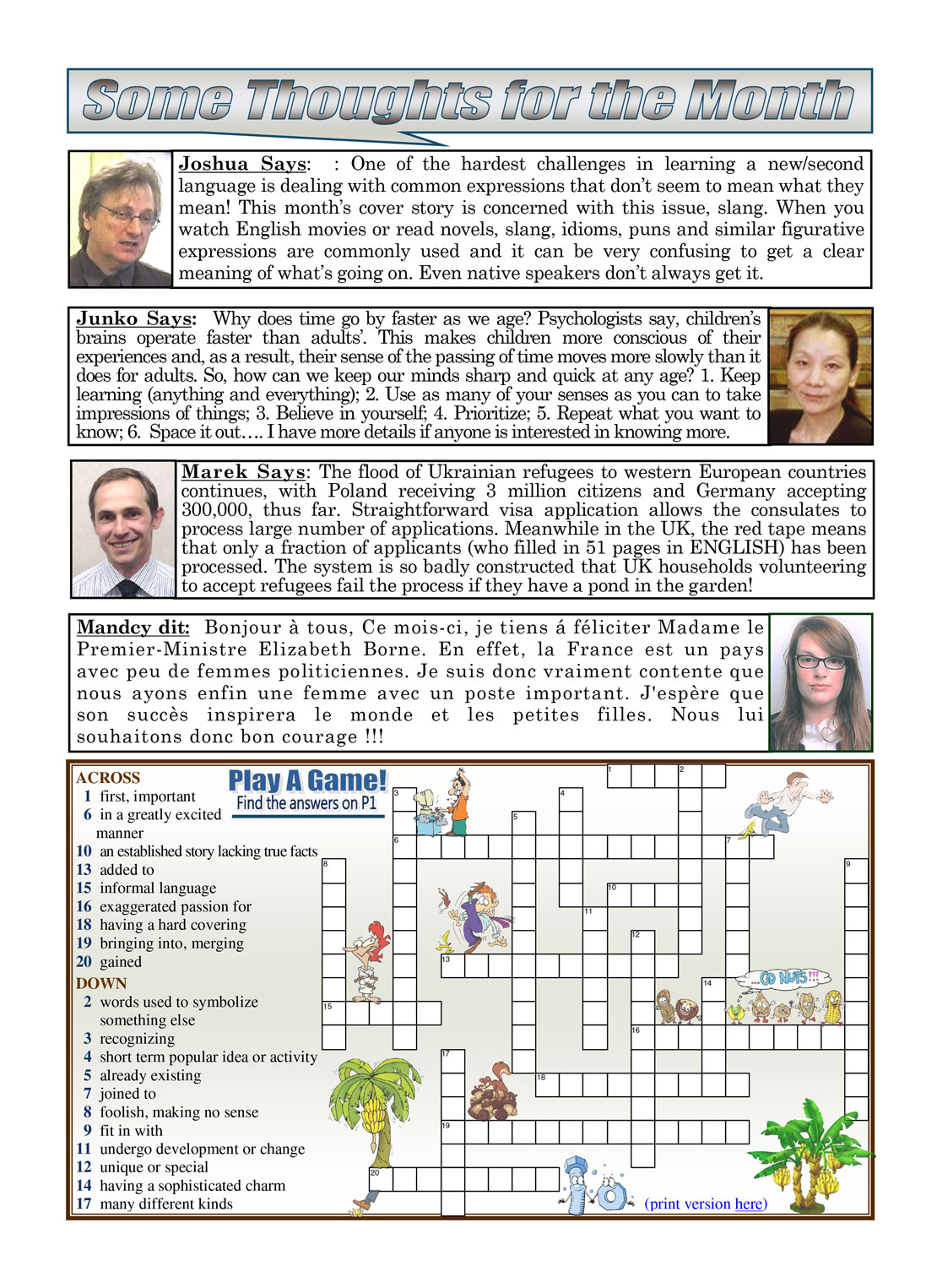 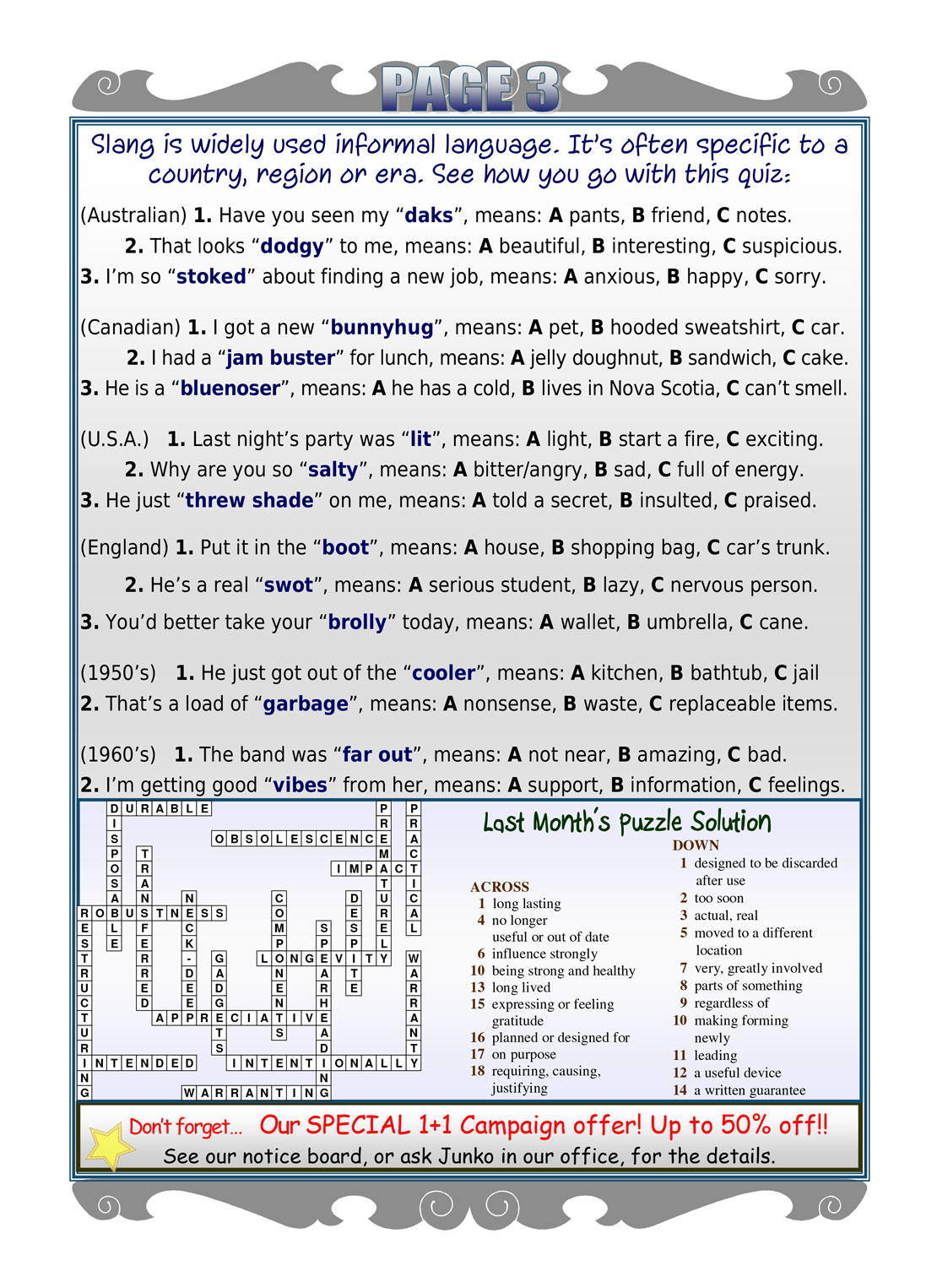